Home | Biography | Poetry | Invite the Poets | About the Program

“We see the ills in our community, the things that are going wrong,” says Albert Mills. 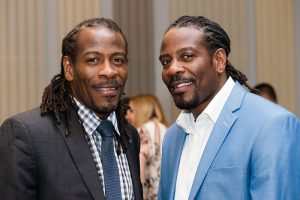 “And we feel that art truly is our way to help address some of these things. Given the appointment, I think we’ll be able to put poetry and art in places and conversations where it hasn’t been in the past. In reference to the violence, in reference to the detention centers, the work-release programs — I just think that art plays a part in the whole scheme of things. I think, so often, it’s completely overlooked as even part of the solution, which we truly feel it is.”

“This appointment will allow us to continue to create an environment where it’s OK to express your emotions and your love, your care and concern for another person,” said Nnamdi Chukwuocha. “This camaraderie, this brotherhood, it’s in everything we do, and it’s sorely missing from our community.”

Twin Poets Representative Nnamdi O. Chukwuocha and Al Mills have dedicated their lives to inspiring under served youth in their hometown of Wilmington, Delaware. As Delaware’s official Poets Laureate, their mantra Art for Life has now been amplified, but their mission remains the same: to interrupt the patterns of underachievement that plague too many of Wilmington’s poorer neighborhoods, breeding hopelessness and violence.

In 2010, Hearts and Minds Film told the story of the origins of their work in the documentary film, “Why I Write: The Twin Poets” Now, “Art for Life” updates the story of the Poets’ work and wider focus that includes Veterans and incarcerated young adults, all part of and their unwavering efforts to achieve greater social justice through the power of the arts.

Dreams are Not Illegal

I had a dream
I had a dream that I was in America
I mean I was actually in the land of the beautiful
And the home of the brave
My boss came into my office and said
‘Hi Bob, how’s it going?
Why don’t you take off early and here is that raise”
As I pulled my Suburban, up to my suburban home
I checked the mail in the box
And saw that I was approved for another home equity loan
Girl scouts were there ringing the bell with cookies to sell
Of course, I bought a box
As Hillary quieted down Marmaduke, who had begun to bark
And later on, me – the wife & kids took a bike ride to the park
When we returned got back we had apple pie with ice cream on top
Then we buckled up and headed on down to the Redbox
To get some videos to watch
When we got in, the kids put on their pjs
And we met in the den
Relaxed on the couch for some family time watching videos
Then all these strangers turned to me and said:
What are you doing here? Don’t you know…
Dreams are Illegal in the Ghetto

Gunshots ring in the heat of the night
Followed by screams, violently disrupting my dreams
In my neighborhood
I don’t have to read the paper or watch the news
To know that something bad happen around here tonight
But once the ambulance leaves, the police sirens stop,
And the crowd disperses
The silence soaks into my soul, sobering my senses
In this often over-intoxicating society
I try to relax but the Devil just won’t let go
He keeps pointing to the signs that are posted all around me
That read: Dreams are Illegal

My neighborhood is the bottom of the barrel
Where drugs get mixed
Here there are no brothers and sisters
Just confused brothers and sisters
Here people drown in the backwash
Of the latest political scandal
In the midst of ghetto chaos dreams are quickly lost
In the ghetto the Devil is in sweet control
As dreams are stole
There is no honor amongst thieves
So dreams are stolen with ease
A high school graduate barely seventeen
Gives up her college dreams, for a pair of tight jeans
And a chance to be the next ghetto queen
In the ghetto checks and basketballs bounce with regularity
Life and death intermix with no disparity
Ghetto youth live for nothing, ghetto youth die for nothing
Everyday blue skies are gray
All they know is, they wanna make $doe
The Devil has them chasing a colorless rainbow
At the end there is no pot of gold, just a pot of steam
Which he exchanges for their dreams
Bonified slaves are made in the Devil’s dream trade
Without dreams you are equivalent to being non-existent
Our children need to be told they can achieve
And that God bless those that hold on to their dreams
We have to take down the signs so that our children won’t know
That the Devil is trying to make dreams illegal in the ghetto.