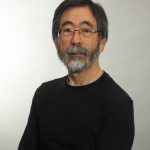 “I have expanded the concept beyond the traditional [photographic] print. I am no longer limited by ‘what the object is.’”

Roger Matsumoto has been involved with photography since he learned the basics during his junior high school days. The photographer for his school newspaper, Matsumoto also did astrophotography using an 8-inch telescope that he made. But “I did not consider what I was doing to be any form of art.” It was only later – on a climbing trip to Yosemite during college – that he “purchased a small booklet of Ansel Adams photographs that made me see what photography was capable of.”

He then began to study seriously, taking a photography class at the University of Utah. After exploring silver printing and some “alternative” processes during the 1970s (including Cibachrome color work), Matsumoto discovered printing with palladium, now his primary process. Since he began exhibiting in 1982, his work has been seen in over 200 shows, including at the Fleischer Art Memorial (Philadelphia), Foundry Art Center (St. Louis, MO), Delaware Art Museum (Wilmington), and the London (England) Camera Club, where his print won first prize. Matsumoto also has prints in the collections of the Free Library of Philadelphia, Utah Museum of Fine Art, and Philadelphia Museum of Art (three prints).

Though Ansel Adams’ photographs were the pivotal inspiration for his work and his artistic practice, Matsumoto was also influenced by the work of Karl Blossfeldt and Brett Weston. His current process “extends the purely photographic image with brushed lines or areas” applied at the same time as the palladium coating, making each print a “distinct realization of the negative” – a monoprint. Matsumoto is also exploring a new series called “Stereo Pair” that mimics the stereo cards popular at the end of the 19th century.

The Newark resident was born in Honolulu, Hawaii. His father was in the Army, and (with his mother and sister) Matsumoto lived in Tokyo for three years as a child in a U.S. military housing base. The family eventually relocated to the Pacific Northwest, and Matsumoto lived in the Seattle region until after graduate school. He then moved to Salt Lake City. He came to Delaware from Salt Lake City and has lived here since 1988, “the longest I’ve been in one place.”

Matsumoto’s palladium images are almost exclusively of botanical subjects. He can make negatives at any time during the year, but “I print in palladium only in the winter when the humidity is low.” This means that often months elapse between creating the negative and printing it. The pandemic, “while not actually a complete re-set of my past practice,” allowed him to try out new films. But there’s been a recent spike in the cost of palladium (and all art supplies), and Matsumoto is also challenged by the “changes made in the materials I use.” However, he’s looking forward to exhibiting again. “These prints need to be seen in person, not only on a monitor or cell phone screen.”

As well as his artistic practice, Matsumoto holds 22 U.S. patents and is a serious musician. He’s an accomplished recorder player (soprano, alto, tenor, bass, and great bass) and for 20 years has served as president of the Brandywine Chapter of the American Recorder Society. Named an Emerging Artist Fellow in 2001, Matsumoto finds this latest award “a great affirmation of what I have been working on” and the impetus for his further photographic exploration.