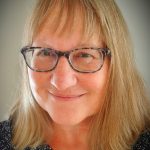 “I aim to capture the extraordinary in the ordinary, finding and sharing beauty in things we might walk past every day.”

Katie West learned early in life about the power of images. Her father, an electrical engineer, was “an incredible amateur photographer” with a darkroom in the family bathroom. As he captured her childhood on film, he taught his daughter to develop and print. Those black and white photographs inspired West, and for 30 years, she followed his example – an amateur photographer taking pictures of her travels and family while pursuing a career.

West and two sisters grew up in New York’s Hudson Valley, their home “filled with arts and music.” She studied dance seriously, taking classes in Manhattan at American Ballet Theater and the Joffrey Ballet. In college at Central Michigan University, West continued dancing and teaching dance, but she majored in journalism, and after graduation she began an arts grantmaking career at the Illinois Arts Council in Chicago.

In 1997, West accepted a position with the Mid Atlantic Arts Foundation, and (after living for a year in Philadelphia) she moved with her son to Claymont. “Delaware felt like home from the start,” with its small-town feel, lively arts scene, and proximity to East Coast “cultural meccas.” West joined the Delaware Division of the Arts in 2014, where she managed its grant programs for five years.

Growing up, West and her family took many trips that instilled in her a sense of exploration and cemented her desire to document her own travels. When she retired in 2019, West “had no real idea what I wanted to do,” planning to travel and “take snapshots along the way.” She spent six months in the Caribbean, Central America, and Greece, editing and posting photos on social media. On her return, West was contacted by a gallery owner to mount an exhibition, the turning point that transformed West from amateur to artist.

Over the next 16 months, she was juried into five in-person exhibitions (in Delaware, Maryland, New Hampshire, and Pennsylvania) and ten online international shows. Five of her photographs are now on permanent display in Delaware’s Carvel State Office Building, and she will have a solo photography show in August 2022 at the Division’s Mezzanine Gallery in Wilmington.

West exclusively creates digital imagery, her pictures “captured with only a high-quality cell-phone camera” and minimal editing. Because cell phones are so prevalent, she finds her phone lens less intrusive, making subjects more comfortable. And while there may be advantages to sophisticated cameras, “a great photograph is more about the story it conveys, which does not require expensive equipment, elaborate staging, or extensive editing.”

West loves taking solo trips, traveling “with my eyes wide open.” She’s especially drawn to the vistas and ambiance of the Caribbean and the Mediterranean, though during the pandemic she “explored closer to home,” wandering and photographing in nearby parks and trails. Being unable to travel also encouraged her to submit online entries to more exhibitions – and being accepted to them gave West the confidence to apply for the Division’s Fellowship.

“Humbled and flattered to be selected and in such amazing company,” West will use her award to “improve my skills and my voice,” develop a website, and share more of her work. “I take photographs because I love to,” but the validation of the Fellowship inspires her and gives her confidence in her search to “achieve visual balance and beauty within the frame.”