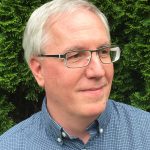 “Theatre is a collaborative art, and a play truly lives when the director, actors, designers, crew and audience engage with the script.”

A decade ago, Jim Hawkins decided to become a playwright after a 25-year career as a Methodist minister. Though he was a published nonfiction writer and had written skits as part of his ministry, his theatre experience “was limited to being in the audience or the pit orchestra.” So, Hawkins challenged himself to see if he could write a full-length play.

His first step was to take a playwriting class at the University of Iowa and then enroll in Villanova University’s graduate theatre program, where he became involved in the life of that busy theatre. He acted and worked on the stage crew, while honing his craft as a playwright and becoming a member of Philadelphia’s emerging playwrights’ organization The Foundry.

Now with several produced plays to his credit, Hawkins was always inspired to write “because I was inspired to read by my parents and teachers.” His mother was a library volunteer, and the Wilmington native frequented the Brandywine Hundred Library, where he “would load up on all kinds of books.” But since theatre is his “encore career,” his stage influences are relatively recent: professors and fellow students at Villanova. Though older than his classmates, Hawkins “learned [from them] how to analyze a script and dig into a play as an actor.”

Like so many others, “I am not alone in being fascinated by William Shakespeare,” and Hawkins set himself a new challenge – to “engage with a troublesome work [by the Bard] and write a new play inspired by it.” The result is his Fellowship-winning script The Shylocks of Venice, inspired by The Merchant of Venice. Set in that city in the 16th century, the play explores the themes of Shakespeare’s play though a different lens – the family of the Venetian Jewish moneylender.

The Shylocks of Venice
June 2021 Draft

All of the actors are on stage for the Prologue. They appear as the first character they portray.

The actors begin to swirl around the stage.

The challenge for Hawkins, and any playwright, is the American theatre’s economic model: a limited number of venues producing new work. But Hawkins is inspired by the personal stories of people he discovers as he’s “reading history, reading the newspaper, or meeting [them] in my everyday life.” He was especially struck by differing responses to the pandemic – how some people profited while others were thrust into service roles that put them at risk. Even though theatre productions were stopped, Hawkins continued to work, collaborating on a YouTube miniseries and writing a one-act play titled Pleasure Doing Business with You.

Hawkins has always loved music – he played the double bass in school and the tuba in adult ensembles and sang in graduate school musicals. But he especially fell in love with opera as a child “mainly through Bugs Bunny” cartoons. Though he acknowledges that he’s never had operatic talent, Hawkins was thrilled to be cast as a supernumerary (“basically an extra”) in OperaDelaware’s 2016 production of Falstaff, a work that (not incidentally) was also inspired by Shakespeare.

Thrilled to be awarded the Division’s Emerging Artist Fellowship, Hawkins plans to develop a new drama and present it in some form – perhaps in a staged reading – by working with his network of other theatre artists. The playwright’s greatest reward is seeing the theatrical experience unfold and blossom for all involved – artists as well as the audience – “when a play comes to life.”