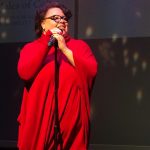 “All of my work seeks to give voice to the raw, dark truths of systematically disavowed characters and the personal and generational trauma that shapes them.”

Writer, performer, and producer Jamie J. Brunson considers herself “a true child of the Civil Rights struggle in America – then and now,” something that has deeply influenced her work lifelong. In all her narratives (plays, memoir, and poetry) and across a wide-ranging career, Brunson carries the same intention – “to affirm the value of life as a basis for exploring spiritual freedom from oppression.”

The writer is no stranger to utilizing art to triumph over trauma. When she was a child, Brunson’s father murdered her mother, whose “dreams were silenced.” So Brunson turned to journaling – which led her to other literary disciplines – as “a safe way to express myself, to hear myself.” Early on, she was also moved by music – soul, early R&B, spirituals, and other Black music – something that has underscored and driven her dramatic works and solo performances.

The Wilmington resident grew up nearby (Delaware County, Pennsylvania) and lived in Harlem, Rhode Island, Philadelphia, and Los Angeles before moving to Delaware in 2008. Early in her career, Brunson was named a New Voice in American Theatre by the Edward Albee Theatre Conference (Alaska). Theatres and performance venues in New York, Philadelphia, Rhode Island, North Carolina, and Alaska have mounted 20 productions or readings of six of her dramas or solo shows.

But Brunson has also carried on a parallel career – producing over 200 live, virtual, and cinematic storytelling events over the past decade. Her most recent project was the documentary We Breathe. We Live. Brotherly Love Protest Stories, aired in May 2021 by WHYY-TV. She also hosts two podcasts titled #US and since 2012 has been a story coach and youth workshop leader at First Person Arts in Philadelphia.

ALL OVER
A One Act Play with Music

In All Over, we are presented with two realities occurring simultaneously. The ﬁrst is a room in The Afterlife designed to look like every Juke Joint that ever existed. This space between life and what lies beyond is the common imagination of the characters that have assigned themselves to be there. The second, is the space where memories live. There exists a veil between these realities.

Both realities are sliding into “The Hole to the Abyss.” The action of the play races against this impending doom.

During the play, characters are forced to relive deﬁning moments over and over again. The play contains original Blues music. Lyrics written by the playwright. Words in all caps are to be sung.

Brunson’s multitasking work ethic is rooted in her upbringing. Raised in a household with grandparents, an uncle, and a cousin, “I am from a working-class family and proud of it.” But as she was growing up, there was no room for artistic aspirations. “Art was something I did after ‘work’ so that I could pay the bills,” something that continues to impact her artistic process. Through all the time that Brunson has been writing and performing, she’s been doing it “from midnight on.”

She is “deeply interested in exposing the wounds,” where Rumi (a current literary inspiration) posits “that is where the light enters.” So Brunson must pace herself, challenged to be patient for the “time, silence, and gentleness” required for her surrealist theatre works to emerge. She also prays before she writes. “Actually, I pray before most things.” Once a piece fully reveals itself – it can take years – and she sees the entire picture, her reward is the feeling of completion and the satisfaction that “it has something for the entire world.”

The Division Fellowship validates that she is being seen, and Brunson is “deeply grateful to be blessed with this opportunity.” The pandemic had a major impact on the development of new theatre work. “Everything was on hold. Much still is.” So as a writer, she will use her award to continuing developing her play All Over and create a solo performance with music, working “to be transformed by the common thread of humanity that connects us – and yes, by individual bravery.”