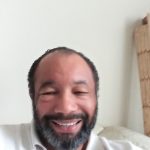 “My characters are people who are either put in, pulled in, or drawn towards circumstances or situations in which they’ve very little to no control but ultimately have to figure out.”

Gregory K. Hammond wanted to be a writer “from the get-go.” In elementary school, he wrote “book reports in the form of plays and presented them for the oral reports.” Later, inspired by the Civil Rights movement and its emerging Black writers and poets, he began to read and write poetry as well as write novels. “Where most kids wanted to grow up and be a baseball player or a star athlete, I knew I wanted to have an impact on my community as a writer/lawyer.”

Hammond’s family accomplishments stoked those ambitions. His paternal family has been in the region for over 300 years, free African Americans – teachers, professors, ministers, nurses, physicians, and lawyers – who have lived in nearby Glen Mills, Pennsylvania, since 1785. His extended family also includes great grandfather Reverend A.D. Hammond, a minister at Wilmington’s historic AUMP Church, and William Still, a noted conductor and station master on Philadelphia’s Underground Railroad.

Though he grew up in Media, Hammond lived during high school in Claymont, where his mother moved with him and his sister after his parents’ divorce. He first attended Columbia University (New York City), but he graduated from the University of Pennsylvania and then headed to Georgetown University (Washington, D.C.), where he received his law degree, fulfilling one of those early ambitions.

Hammond then embarked on a career that included living and working in China, the West Indies (Grenada and Jamaica), South Africa, and the Democratic Republic of the Congo (formerly Zaire), where he has set Blue Money, the completed spy novel that garnered the Division’s Fellowship. The multi-lingual novelist – he speaks Spanish (“some”), French, Swahili, and Korean (“some”) – was influenced greatly by his peripatetic career. “The international travel spawned my interest in international stories.”

After reviewing the dossiers, Dada and I drove west on Boulevard du 30 Juin. I didn’t know where to go. Someone had a bull’s eye on my chest, and I had to figure out why. Experience told me, a sitting target was easier to hit, so we kept moving. I stopped at a traffic light, glanced into my rearview: nothing. Instead the sun appeared like a big orange explosion in the east.

A throng of people waited on the boulevard for transports to work or the market. My gas tank was low. In Kinshasa gas prices were high and my American dollars were depleted. Ordinarily, I’d use my embassy credit cards, but feared that that would bring attention. Someone at STAR was monitoring my movements. We needed somewhere to stay and rest, so I could think. I’d two-hundred US dollars, not enough to eat, find shelter, and gas the Rover.

Now a Wilmington resident, Hammond continues to be inspired by novelists in his chosen genre like Walter Mosley, John Grisham, and John le Carré. He finds his biggest literary challenge in creating memorable characters. “I want the reader, make no mistake, to feel as though they know who this individual is and why.” He also works to create a story that “stays with you days later [and] dialogue that’s in your head.”

Hammond is a storyteller in other genres. In a WHYY documentary, The History of Thornbury Township (Civil War to the present) that won an award from the HBO History Channel, Greg appeared as a narrator on the early African-American presence in the Thornbury community, and more, specifically his family’s. When writing, he is rewarded when able to complete “the perfect words to sum up that sentence, that paragraph, and that chapter” in language that will keep his reader “in anticipation as to what will unfold.”

For the past decade, Hammond has also been the caregiver for his mother, writing early in the morning before she rises and at night after her day is finished. He finds that the pandemic has not had a major impact on his work. “If anything, [it has] made it easier for me to maintain a routine and stick to a schedule.”

Hammond will use his award to attend workshops and develop a website, and he hopes to secure a literary agent and publish Blue Money. He’s begun a new thriller set in Miami and Cuba and is also at work on a short story collection based on his international travels. The Division’s Fellowship gives Hammond “creditability and confidence” to keep writing, to “put it on paper and make it memorable.”