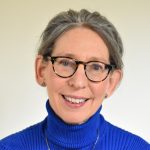 “I am drawn to the foolish, the eccentric, the extreme, to those characters who remind us, as Robert Burns did, that we might not see ourselves as others see us.”

Forty years ago, Gail Husch played with a lump of clay and turned it into a crude figure of a woman in a bustled dress. She was “exhilarated by the transformation of malleable earth into a creature with its own expressive life.” Husch made several more figures, but she ultimately moved in a different direction, turning her attention in graduate school to becoming a museum curator, professor of art history, and scholarly author.

Four years ago, after retiring from her 28-year career in the Goucher College (Maryland) art department, Husch “with some trepidation, picked up what I had abandoned decades earlier.” She set up a home workspace, found access to a kiln, gathered supplies, and “began anew.” Since then, she has completed a chess set (with “arrogant kings, condescending queens, and belligerent knights”) and a series of characters from literature and historical eras.

The artist creates her evocative figures based on subjects that “invite complexity and exaggeration.” Her Fellowship-winning ceramics include an 18th century French fop, a Victorian couple, and characters from works by Charles Dickens. They portray “small people who teeter on the edge of the ridiculous without, I hope, losing their vulnerable humanity.”

Husch was born in New Hampshire, but after her parents’ divorce, “my mother’s adventurous spirit took [my sister and me] to many places.” She attended 13 schools – living in Chile, Switzerland, Germany, Connecticut, Massachusetts, Florida, and New York City – before enrolling (aged 16) at the University of South Florida. Husch and her husband came to the First State in 1984 when she enrolled in graduate school. In 1992 she received her PhD from the University of Delaware, and “now, [the state] feels like home. I have never lived anywhere else this long.”

Fueled by that peripatetic childhood, Husch became an avid reader – especially of 19th century English and Russian novels – and reading is still the major influence on her visual work. Drawn to this fiction for its “pictorial descriptions, vivid characters, expressive range of emotions,” Husch is still informed by literature and history, by “how people lived, looked and acted – so much like us today, yet so different.” She also draws inspiration from contemporary cartoonists and caricaturists and “people I see around me.” And not surprisingly given her love of language, Husch has also written a historical novel and tutors for Literacy Delaware.

Ceramics always poses technical challenges. “Will the piece crack while drying? Will it survive firing in the kiln?” But Husch’s greatest challenge is capturing character and expression. Though she begins by visualizing a figure’s pose and expression, she does no preliminary drawings and works directly in the clay. She then paints the completed figure with acrylics (no glazes), so if color doesn’t work out, she must repaint or remove it entirely. But she’s rewarded when “a piece comes to life the way I hoped it would” and again when someone responds to her work.

Though she has a studio at home, Husch has no kiln and fires her pieces at the Delaware Art Museum (where she takes classes). During the pandemic, when the institution was closed, her work was stopped. Receiving a Fellowship not only gave her “a great boost of encouragement,” it will also help her purchase supplies and acquire a kiln. In so many ways, Husch is “grateful to have ended up here.”