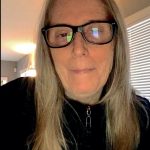 “Poetry is so inclusive. I never know what might trigger the next poem.”

In her first iteration as an artist, Alice Morris was a basketmaker, creating her works primarily from white oak trees “that I cut down in the woods, then split out by hand – every part of the basket fashioned from a tree.” Just as she once used every part of a tree in her prize-winning basketry, Morris (who came to her writing practice in the past decade) utilizes every part of her life to “trigger a poem . . . causing the need to sit down and sort out something I am sensing.”

One of a family of eight, Morris grew up in the 1950s outside Minneapolis, in a development turning farmland into a suburb whose “gently curving streets had been part of an asparagus field.” The neighborhood was filled with children, and her earliest creative inspirations and literary influences were the three girls next door. “They were smart!” Morris constantly listened for “new words, facts, and ideas” that would impress them. In high school she found Shakespeare and Robert Frost, and in college the works of other poets “who set their voices down skillfully, clearly, boldly.” But her ability to take in and crystallize the world around her – the work of every poet – was honed in childhood.

After her success as a visual artist, Morris found a need to focus on “long-deferred thoughts, feelings, and impressions . . . to find and use my voice.” Her artistic practice is still inspired by what’s around her, “usually something I would never expect – a dead bird, a mangy beat-up cat, an experience at a doctor’s office, emotions, nature, conflict, current events–anything.” Coming to writing later in her life allows Morris to share feelings and experiences that “as a younger person I would have never dared put on paper.”

After living in Baltimore and West Virginia, the Lewes resident came to Delaware 34 years ago. With her colleagues, she’s active in regional writing groups, and her recent poems have been very widely published. “Early on, I knew writing was risky and challenging,” so Morris wrote sporadically until the past decade, and she still finds the daily practice a challenge. “Sometimes I’m not so patient. But poetry will not be pushed around. I can’t force it to comply,” and often “inspiration will return later.” She’s gratified when a piece comes together, “when it’s accepted for publication in a space where I thought it would fit perfectly.”

the day the snow fell hard like white rain
the day the jays
devoured the suet in the green cage dangling
from the back fence
the day the yard filled with cowbirds, martins and grackles
the day I watched the red-headed woodpecker
without a mate
fly from fence to dead peach
where he pecked away
thrusting head from side to side, then hammered
beak against branch –– this
the day I found my dog of twenty years dead
on the bare oak floor, positioned
to guard
the front door

Morris was deeply affected by the fear and cancellations of the pandemic, as well as by the shutdown of her writing groups. She took virtual classes and workshops, writing COVID-related poems, as well as revising and editing earlier work. But her “intense need to be creative, to overcome obstacles” enabled her to continue writing. She also still makes “the occasional wood and metal assemblage or ‘easy style’ stained glass window” and has a burgeoning interest in photography, hoping to develop a practice in that visual art to accompany her poems.

For Morris, “receiving the Fellowship is an honor and significant vote of confidence” in her writing and her process. It gives her an incentive to “keep moving forward,” to achieve her goals of publishing a poetry collection and delving into the other print ideas she’s had for many years, always taking in the world around her and then listening “to my own internal voice rather than to naysayers.”