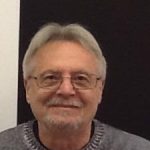 “Painting or sculpture? I’m not overly concerned on how to categorize, only to be appreciated.”

Jack Knight was “always drawing as a kid,” even though his high school had no studio art lessons, only classes in art history. But those classes led him into the art world. There, he was mesmerized by two widely disparate artworks that deeply inspired him. “Seeing Picasso’s Three Musicians and Stuart Davis’ Lucky Strike was the spark that ignited my interest even more.” And as an art student in Buffalo, he also studied the constructed boxes of Joseph Cornell at that city’s Albright-Knox gallery.

Born in Ontario, Knight grew up in western New York, earning a BS in Art Education from Buffalo State College and an MFA in painting SUNY Buffalo. Painting was originally his primary discipline, but the artist has also enjoyed working in three dimensions. He’s lived, taught, and pursued his studio career in New York state, Massachusetts, New Jersey, and Philadelphia, where in 1997 he became a member of the Philadelphia Sculptors and formally added 3D work to his practice and his teaching roster.

Throughout his busy career, Knight has had 17 solo exhibitions and has participated in over a hundred group shows. His work is found in the collection of ten institutions and three museums, but – spurred on by those early “igniting” influences – he’s never stopped exploring the artistic spark. His newest direction, for which he was awarded the Division Fellowship, is a departure from traditional easel painting. These are works he calls “combines,” so named because the artist combines canvas, wood, and Masonite into sculptural painted constructions that hang on the wall.

Unlike his oil paintings, where Knight works with prior sketches and a methodical process, these combines are extemporaneous creations, and they are challenging. While they utilize many of the shapes and techniques of his prior paintings, here “I have no previous concept or idea. [They] are free-spirited and exciting to execute.” Knight is rewarded by the surprise of “the finished artwork . . . sitting on my stool and examining the work on the studio wall.”

When not in working his studio, the artist enjoys going to see live theater, where he especially appreciates the stage settings – not unexpected, since he also continues to create narrative assemblage boxes filled with props. He plans to use the Fellowship award as an opportunity to purchase materials and supplies to continue working on his combines, which he began only about a year ago.

The cancellation of so many exhibitions and curator visits – along with his inability to see and interact with the work of other artists – has been troubling to Knight. But “we are blessed with our first granddaughter,” a look to the future that echoes his lifelong curiosity and the adventurous spirit so well-evidenced by the Picasso quote anchoring his website: “Every child is an artist. The problem is to remain an artist once they grow up.”