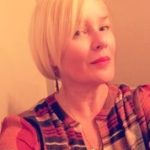 “The book will explore the richness . . . of human circumstances. People are surprised by the stories I have witnessed of poverty, death, wealth, birth, love, and hatred.”

Carrie Sz. Keane grew up in Pittsburgh, dressing her cat in baby clothes and playing at birthing with Barbie dolls. The youngest of five children, she “always wanted to be a mom, [though] I never did become one.” But she did become a dedicated midwife and award-winning writer.

A Delawarean for sixteen years, Keane came to the First State through the government funded National Health Service Corps. After graduating from the University of Maryland with a journalism degree, she was elated at her acceptance to Yale School of Nursing (where she received her master’s degree in Nurse Midwifery), but “equally despondent” at the enormous price tag. Fortunately, she earned a full scholarship with the caveat that “I would work in a federally qualified underserved health center upon graduation.”

That’s how Keane came to Sussex County, where she began a career in midwifery and women’s wellness in locales ranging from clinics and consultancies to major healthcare providers. The Milton resident has “‘caught’ between two and three thousand babies, privileged to be a witness to the miracle of birth and the wild emotional physical journey of procreation.”

The year is 2020. The year of hindsight. Rose Nettie* is 20 years old. She is Haitian. She moved here, to Delaware, ten years ago, after a 7.0 magnitude earthquake, walloped her island country, cracked open her homeland, displaced 1.5 million people, killed somewhere around 300,000, and blew down a cement wall on top of her mother, a 32 year old woman named Lovey. 75 percent of the population of Haiti became unemployed. In the aftermath of the tremors, a cholera outbreak from unclean water ravaged several communities. Undocumented Haitians living in the United States were granted temporary protection status (TPS), allowing them to stay and work here. Over the next decade, the status was temporarily extended a few more times.

Keane has continued to journal and write throughout her medical career, and the in-process first-person memoir for which she received the Division’s Fellowship is tentatively called A Midwife Crisis. It explores women’s health and the birth process, “the most human, rather animalistic, of private moments . . . which I have aided thousands of times but due to natural causes will never partake in myself.”

Keane is challenged “to present all sides of the true story . . . not just the pink and blue bows and blissful joy that most associate with motherhood and babies.” It’s a balancing act to present these tales and her own role in them, finding humor without being callous and writing with sensitivity to real people and “their privileged and private information.”

Keane came to midwifery through literature, moved by reading Ina Mae Gaskin’s non-fiction Spiritual Midwifery. And her literary inspirations continue to range as widely as her medical experiences, leaping from Mr. Rogers and Ernest Hemingway to Elena Ferrante, The Grateful Dead, and the writers of the Milton Workshop. It was serendipity that she joined the latter: On a coffee shop bulletin-board, a postcard showed “Hemingway pointing a gun at me [saying] ‘Finish your damn novel!’ . . . I showed up at a stranger’s kitchen table that Sunday and met nine other writers.” She still is part of the Workshop, gatherings that gave Keane the impetus to begin and continue her memoir.

The award will allow her to attend a writer’s conference and pay submission fees. It’s also “an enormous push and incentive for me to keep writing.” Because Keane is a full-time healthcare clinician, the pandemic increased her workload; “I have not had any quarantine time.” But the day after she was notified about the Fellowship, she broke her leg skiing. Unable to walk for several months, she received inspiration from a new source – her brother – who admonished her: “Well, now you have plenty of time to write. Finish your damn book!”