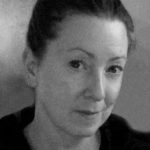 “I am enamored by…folklore, myth and fairy tales in my stories. As far as I’m concerned, nothing beats the all-engrossing, wide-eyed magic of a good yarn.”

Kim DeCicco has taken an unusual and winding road to writing. “Not one to read for ‘fun’ as a child,” the Lewes resident’s first inspirational influences were 1970s rock albums “pilfered from my brother’s record collection.” Literature came at first through music and historical movies like Man in the Iron Mask and Robin Hood. But a true igniting literary spark came from The Alan Parsons Project’s concept album Tales of Mystery and Imagination, a musical retelling of Edgar Allen Poe’s horror stories.

This is a tale of two sisters, born the same day, twenty minutes apart. They were as close as twins could be; they knew each other’s thoughts, could finish each other’s sentences. When one felt pain, the other shivered uncontrollably. But when it came to appearance and dreams, no two sisters could be more different…

Born on New York City’s Staten Island, DeCicco earned a master’s degree from Cooperstown’s Graduate Program in Museum Studies and then moved in 2004 to Delaware. In 2005 she decided to attend a “free write” session at the Rehoboth Beach Writers’ Guild, and it was a great motivation. “I felt it was time to start writing down the stories running through my mind.”

She began studying the writing craft, attracted to “learning about and postulating on the history of people, our things, and why we like the things we do” and connecting herself to the world at large. In 2018 DeCicco committed to “making time to write instead of waiting for time to be available,” and since then she’s published her first piece (Beach Dreams 2019).

Her background in museum curating and exhibition development, as well as a lifelong love of myth and folklore, allow DeCicco to infuse stories with history and other-worldly flair. She especially admires the works of Alice Hoffman, “a master at blending reality with lore,” and the works of widely known authors like Carol Goodman and Delia Owens.

DeCicco is also inspired and heartened by fellow local writers, from whom she continues to learn about the craft of writing and who provide a “welcoming environment in which to practice and cheer each other on.”

Genealogy research, exploring museums and their collections, and reading folklore and fairy tales are activities that aid DeCicco in rising to the challenge of “writing, the whole process of writing.” Receiving the Division’s Emerging Artist Fellowship “inspires me to work even harder as a writer,” and she plans to use it to expand her practice. “I see it as an affirmation: If I was able to reach this goal, then I can certainly reach another.”