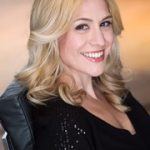 Britania Redington was perhaps 6 years old when she came to a realization. Playing in her bedroom, singing with gusto songs from “Annie,” she came to notice that her voice sounded pleasant.

“I remember being excited and going to a friend’s house, and I said, ‘Look what I can do!'” she says. “And I would sing. I don’t think my friend was as impressed. I think some part of me knew that maybe not everybody could do that. But that’s not really a good reason to pursue anything. I just remember feeling kind of special and really enjoying singing my lungs out.”

Her interest wasn’t spontaneous – Redington’s youth was bathed in music. Her passion for opera began when she heard her grandfather, in his basement, singing along with records of the Italian tenor Enrico Caruso. Her father played classical music albums and enlivened the experience by telling stories to fit with the music. Once Redington heard “Die Zauberflote” at age 14, she became certain that she wanted to be a professional singer. Lessons soon followed, and she’s been studying ever since.

Through high school, she sang with every choir she could find. She already could read music, thanks to lessons on flute and piano. Her family often moved, and upon graduation, Redington, then in North Dakota, had little guidance beyond her family.

“Nobody there could tell me, ‘Oh, you need to go here,’ or, ‘You need to do this and that,'” she says. “It was a lot of guesswork, and I took a few years off here and there.”

Redington, a soprano, has lived in Delaware since completing her master’s degree. Now an adjunct professor at Wesley College, Redington teaches voice, opera scenes and has led a range of classes on subjects such as the history of rock, world music, and music and spirituality. She also maintains a small studio of private voice students.

Lately, she has been working on two projects: the first is a standard voice recital (7 p.m., May 23, Dover Presbyterian Church) featuring art songs in French, German, English and Spanish, along with some of her favorite arias; the second, whose performance date and venue has yet to be determined, will be a cabaret including some of her favorite songs from the Great American Songbook, as well as select classical pieces. (She’s been working on the latter with a New York director.)

The Division’s grant, Redington says, will help offset the many expenses of pursuing a singing career, including travel, auditions, application fees, lessons and accompanists.