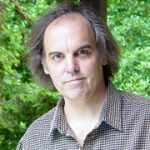 This is not Sandro Botticelli’s “The Birth of Venus.” The goddess in Thomas Newby’s painting of the same name stands not on a scallop shell at the shore but on the logo of Shell, the global energy company, set against a backdrop of solid teal.

Newby’s Venus lacks the familiar, flowing locks of auburn hair, the curves of the female body and any semblance of facial characteristics.

That’s because Newby, using acrylic latex paint on a 48-by-32-inch wood panel, painted Venus as the iconic symbol that designates public bathrooms as for women: a white circle for a head, rounded edges where hands and feet belong, and the familiar flare of a skirt.

The painting is part of a series he calls “Ubiquitous Figures,” which Newby, of Wilmington, considers “kind of a culmination of a lot of work in figurative.” He has practiced figurative work for years, mostly in drawing, ranging from the realistic to the abstract.

Over time, his attention shifted from the drawing to the interaction between the audience and the person in the drawing.

“I was not as interested in what my contribution to it was in terms of the artistry of the drawing,” he says. “It had to do with communicating some kind of connection between the audience and the person that’s being represented. I am and always have been more of a conceptualist.”

Newby liked working with the concepts of figurative work, he says, but he wanted to experiment with a more minimalist, reductive approach.

“That’s when I decided to start using these symbols and appropriating pieces,” he says. (Other paintings in the series refer to Manet’s “Olympia,” Fra Angelico’s “The Annunciation” and Masaccio’s “The Expulsion from Paradise,” among other classics.) “Then I started working with a narrative surrounding the figure and relationships within the figure. I found that when I went to the simplified ones that I had no vested creative interest in – I just took them and put them into context – suddenly, it created more of a blank canvas for the viewer. The viewer was able to self-identify with the figures in the paintings in a way that was more immediate and stronger than when the figures or faces were more defined.

“Given the simplicity and the restricted vocabulary of the new work, there was more superimposition of what the audience was bringing to it. There’s a sort of visceral thing with those figures – you always use them to direct you to the bathroom. You self-identify with those figures automatically. It’s already been done for me. Everything’s been conditioned.”

The process, for him, is liberating. He takes a formalist approach to the “Ubiquitous Figures” paintings, and although a glance might suggest the use of Photoshop and digital manipulation, Newby physically moves cut-out shapes around the vast surface area of each piece before committing to paint, layer upon layer.

“The characters have an enormous amount of inherent personality,” he says. “They’re a mirror. They are blank, they are generic – they are you.”

Newby, now in the midst of reinterpreting six paintings of Greek mythological characters as silk-screen prints, will show his “Ubiquitous Figures” work in November in the Mezzanine Gallery of the Carvel State Office Building, in Wilmington. For more, visit www.tomnewbyart.com.