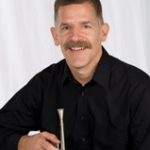 Before he plays the horn for any among an assortment of professional orchestras and opera companies, John D. Smith likes to wander through the lobbies, absorbing the buzz of the expectant members of the audience.

When he performs at a school, he walks the corridors. When his office is a Broadway theater, he mingles with patrons on the sidewalks.

These are some of the ways Smith – a highly active performer, a doctoral graduate of The Juilliard School and a full-time college professor – works to avoid disengagement.

“The electric sense of anticipation and high hopes for a great performance by audience members is contagious,” Smith says, “and it carries over not only to the performance at hand but to my own practicing as well.”

Smith, principal horn with the Chamber Orchestra of Philadelphia and Opera Company of Philadelphia, is an associate professor of music at the University of Delaware. There, he teaches music literature and applied horn, coaches chamber ensembles and regularly performs in his own recitals. (He also is a member of the Del’Arte Woodwind Quintet.)

His strong presence in both the performing and academic wings of music is unique. Smith recalls an illustrative encounter during his time studying horn at the Royal Academy of Music in London. He was visiting Oxford University’s Bate Collection of rare instruments and mentioned to the curator that he was on an exchange program from Juilliard.

“At Oxford,” the curator replied, “we study music.”

Smith took that as a shot at those whom the curator deemed mere performers.

“I was struck by this dichotomy within the music discipline,” Smith says, “and traditionally musicians have indeed assigned themselves to one of two camps: full-time performers or full-time pedagogues, with occasional forays to the other side.

“I feel enormously privileged to have enjoyed success in both areas simultaneously and at high levels.”

He tries to infuse that appreciation into his students. They should approach their performances, he tells them, as living art, as “honest, vulnerable and sometimes painful extensions of their true selves and the worthy product of lonely hours spent in the practice room.”

When Smith speaks of his craft in such ways, the oft-used concept of an artist connecting with just one listener among many seems more authentic. He approaches his own performances with that in mind. And unlike many of his colleagues, he continues to infuse that sensibility into fresh crops of hopeful musicians.

He plans to use the Division’s grant to present concerts in all three counties. The performances will feature traditional and contemporary works for the orchestral horn and are designed to showcase the instrument in its versatile solo and chamber music voices.