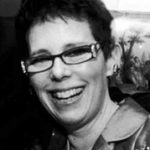 Judith Goldsmith had an art teacher in high school who also taught a class for public school students Saturdays at the Detroit Institute of Arts Museum. There, the teenager found beneath the thin egg tempura paint of a famous work the pencil markings of a grid.

It was a hint of the planning that went into the piece, Bruegel’s “The Wedding Dance.” It was a moment of realization for the young Goldsmith: “To make a painting,” she says, “is to think everything out.”

She is fascinated by the relationship between observation and abstraction. She uses still-life subject matter, which provides ample opportunities for the manipulation of light, shape, color and texture.

That interest stems from her time studying with the teacher, who was knowledgeable of abstract expressionism. Goldsmith began looking at paintings as more than pictures. Studying Bruegel’s 16th-century painting “The Wedding Dance,” a vibrant scene of celebratory peasants dancing to music in the woods, led her to the conclusion that “an interest in representing the physical world is not at odds with abstraction but joins with it in making successful observational work.”

Goldsmith’s influences are vast – she names among them individuals such as Velazquez, Degas, Matisse; genres such as Roman wall paintings, abstract expressionism, Netherlandish flower paintings and Persian and Mughal painting; and the decorative arts, especially the Arts and Crafts Movement.


All of this might seem a mishmash, but Goldsmith explains the purpose of her work quite directly: “The overall direction is headed toward simpler compositions, strong areas of more intense color, and organization that is graphically powerful.”

She’ll use the Division’s grant to whet an appetite for high-quality paints and brushes. Until recently, she had been rationing her use of such expensive materials.