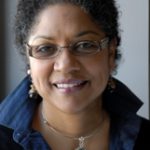 A native of New Orleans, Colette Gaiter knows of the poverty that can lie beneath a veneer of culture.

“There is a layer of languid despair under the obvious ability to function and even thrive despite serious poverty,” she says. “Tourists mistake the music, dancing, laughter, color and light for satisfaction.”

Her latest work, a series called “This is not Cuba,” examines contemporary Cuba utilizing digital montages that convey both motion and inertia. The combined images, photographed at different times, play off each other – elements of African religion and tourist kitsch, for example, or of capitalism and socialism. The contrasting themes somehow work together, illuminating larger truths.

When in 1990 Gaiter resumed creating her own work, the Internet wasn’t yet ubiquitous. Bulletin boards and other online chat groups, however, gave her opportunities to broadcast her ideas in a forum apart from the typical galleries. And while working in New York City as a graphic designer, she dipped into the deepening waters of computer graphics. (She has worked with computers since 1982.)

Gaiter, in other words, had begun experimenting with new media well before digital manipulation took its foothold in the art world.

Her images, she hopes, “visualize the struggle to hold onto some of the past while crafting a more egalitarian future.” The Cuba series, for example, acknowledges the revolutionary slogans of the Communist nation, which she likens to the ever-present advertising in capitalist societies – both forms of signage, Gaiter says, function to standardize societal values.

“I want people who view the images,” she says, “to think beyond the exoticism of fading grandeur or lush tropical rural landscapes and question what liberation really means.”

She has plans, meanwhile, for the grant. Gaiter has been creating digital photographic montages from three trips to Cuba, and she wants to use them in creating three-dimensional wall “tapestries,” made from found objects fastened together with crocheted material such as wire.

The grant also will help her expand her work to include other media – she wants to “reclaim my affinity for craftsmanship with materials rather than just working digitally.”